Employment in constituting 25 percent of the overall manufacturing industry and 6 percent of Turkey’s textile and apparel industry is also 40 percent female employment rate in one of the most democratic sectors of our country.

Textile (in other words, weaving) is the oldest production activity in the world, consisting of the stages of making various fiber types first into yarn and then combining them in certain patterns and colors to obtain fabric and then the final product. Textile, ready-to-wear, leather and leather products sector is in close relations with each other, consisting of products that reach consumers with the concept of fashion. In particular, the textile industry has become a part of the ready-to-wear industry by taking part in the supply chain. Both sectors are often considered under a single name as the textile sector.

The emergence of textile as an industrial branch started in England with the industrial revolution. In 1733, John Kay, a small craftsman in the weaving industry, invented a tool called the ‘Flying Shuttle’ and quickly became able to do what 7 arm power could do. From the 1750s, demand for yarn reached its highest point in both British and world history.

The textile industry has played a leading role in the economic development of developed countries after the industrial revolution. Later, Turkey and has been a leading sector in terms of emerging economies such as China. Today, the world’s biggest textile exporter of garments in China but also most countries that export yarn in position to play a leading role in Turkey.

EXPORTS AT A CRUCIAL LEVEL

cotton textile industry started to develop on the basis of agriculture in Turkey, which exports a significant level with the help of liberal economic policies adopted in the 1980s, has become an industry. In addition, many years of experience and knowledge of the sector, modern machinery and equipment equipped with the latest technology and creative design capacity have been the factors that increase production and export performance. increased capacity and export success caught the years, Turkey has become one of the world’s leading textile suppliers. Turkey is now the world’s 7th apparel industry, is the largest manufacturer in Europe and 3rd. The machine park established for the production of broders and guipures in home textiles is the world’s largest machinery park. Moreover, Turkey’s average export price in 2018 of 168 billion USD in cash, while exports in the apparel industry, this figure reached 1.4 USD to 18 USD. In other words, the apparel industry has become “design sells”. 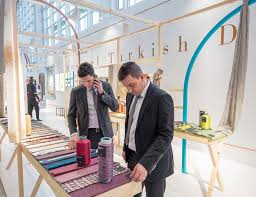 When we look at the current account deficit, we are talking about a sector that adds value to the national economy as almost all inputs are produced in our country. On the other hand the domestic market consumption of almost outside the front in a very small percentage of imports to meet fully the sector, Turkey is an indispensable value in terms of economy.

The share of textile sector in Turkey has dwindled to the lowest share of imports last year by 2.9 percent.

Turkey’s international trade (according to GTİP code), we are experiencing an interesting situation when we examine the titles listed below textiles. Turkey’s textile and apparel sector is the first sector as a whole foreign trade surplus up to today. Moreover, this excess amount was fixed at the level of 14-15 billion USD in the last 6 years. In 2018, when the economy slowed down and foreign purchases decreased, the net surplus of textile rose to 17.5 billion USD. This figure was recorded as the biggest surplus of textile on an annual basis. With this much Turkey is close the gap occurring from other trade.

One of the important contributions of the textile and ready-made clothing industry to the national economy is seen in the field of employment. According to SSI data in September 2018, accounting for 25 percent of overall employment in the manufacturing industry and 6 percent of Turkey’s textile and apparel industry is also one of the most democratic sectors of our country with the female employment rate of 40 percent.

An advantage of the textile industry and at the same time is a factor which may disadvantage in world-famous brands turn to cheaper labor markets together with the depreciation of the exchange rate, which has become the production center of Turkey. Increasing the minimum wage by 26 percent in 2019 has made companies a little more difficult in this regard. This situation increases informality. In addition, it increased employment as cheap labor in the Syrian approaching 3 million in 2011, in 2016 the number of Syrian refugees in Turkey has zero. It observed upward trend in unemployment as a result of the crisis in Turkey in 2018 and reached its highest level in recent years by 12.3 percent as of November 2018 the unemployment rate in Turkey. The textile industry also contributes to this. At the “Employment Mobilization 2019 Publicity Meeting,” on February 25, 2019, Minister of Treasury and Finance Albayrak announced that 2.5 million jobs will be provided in 2019. The textile industry is also important here.